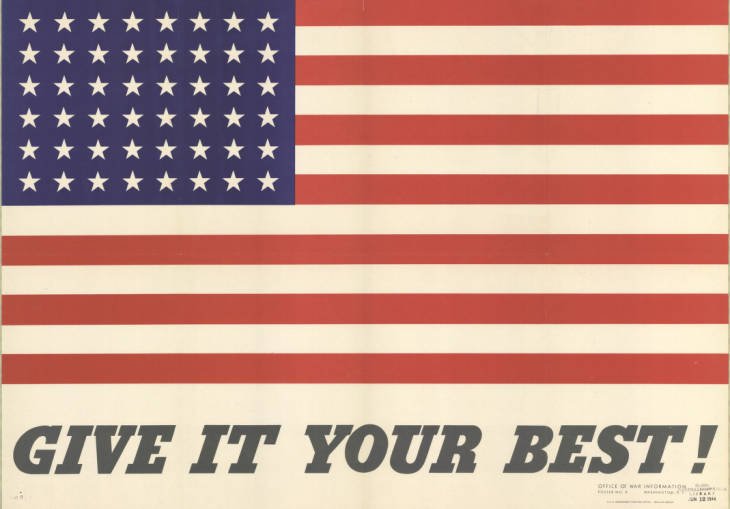 United States of America Propaganda Campaign= gain and unite the American population in efforts to support the war effort.

(All of the WWII posters displayed on this blog are from the Oklahoma State University Archives website).

The American Government practiced a strategy of truth, rather than the ordinary definition of propaganda: “information, especially of a biased or misleading nature, used to promote or publicize a particular political cause or point of view”

Other propaganda tactics focused on fear, betrayal, jobs, and enlistment.

“We have faith that future generations will know that here, in the middle of the twentieth century, there came a time when men of good will found a way to unite, and produce, and fight to destroy the forces of ignorance, and intolerance, and slavery, and war.”

The USA government believed telling the truth was a more effective way to achieve their overarching goal of uniting the population behind the war effort and the war in Europe. The propaganda posters asked regular American citizens to ration their food and to conserve everyday materials to ensure the soldiers abroad had enough food, metal and other essential items (most notably coffee).

“I hope every American who possibly can will grow a victory garden this year. We found out last year that even the small gardens helped.

The total harvest from victory gardens was tremendous. It made the difference between scarcity and abundance. The Department of Agriculture surveys show that 42 percent of the fresh vegetables consumed in 1943 came from victory gardens. This should clearly emphasize the far-reaching importance of the victory garden program.

Because of the greatly increased demands in 1944, we will need all the food we can grow. Food still remains a first essential to winning the war. Victory gardens are of direct benefit in helping relieve manpower, transportation, and living costs as well as the food problem. Increased food requirements for our armed”

The government also designed and disperse posters targeting the rationing of food and economic price controls. After the bombing of Pearl Harbor, President Franklin D. Roosevelt (FDR) issued price controls in an attempt to quickly fund the war–even though price controls are unfavorable with economists, President FDR believed it was a state of emergency. from the price controls, the government gained an immense amount of control over the many economic sectors of America.

Another propaganda tactic was fear; Fear was spread throughout the American population through creating the idea that the enemies (Nazi Germans and their allies) spies were everything–listening to what regular Americans said about the war, in efforts to defeat the Allied forces.

“Soldiers, Sailors and Airmen of the Allied Expeditionary Force! You are about to embark upon a great crusade, toward which we have striven these many months. The eyes of the world are upon you. The hopes and prayers of liberty loving people everywhere march with you.”